Show #376: You are either doing it. Or choosing to wait 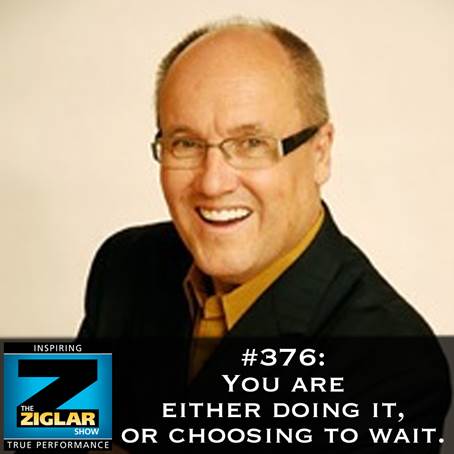 Hey, Ziglar audience, thank you for being with me today. And, wow, I’ve got to say a specific thanks to all who have left us raving iTunes reviews in just the past two days in response to the two shows on marriage I did with my wife, Teri. You have blessed us for sure, but I’m mainly just grateful that the content was of value. Thanks also to the 2-star reviewer that said I spent too much time tooting my own horn, and we had too much old-fashioned Christianity. If I couldn’t take a shot, I wouldn’t risk being on the stage.

So…today’s show is quite possibly one I’ll refer back to…forever. With any root, foundational message, there are myriad relevant topics to discuss. But then there are also…the undeniable roots. This is one.

The takeaway I desire for us all:

We know enough to do what we need to do, or at least absolutely start. Right now. If we aren’t starting, it’s because we just don’t want it badly enough yet. Which might be ok for now, but let’s at least just be honest. Let’s not kid ourselves.

My guest, back for round two, as we did Show 375 together…and it’s my complete honor to introduce him again…Dan Miller. Yes, there are enough authors, speakers, and leaders in my immediate family to fill the Ziglar show. Why? Quite possibly because we all grew up…listening to Zig. Which bodes well, as we’re all here discussing, learning from, and striving to live out his legacy and message, eh?!

My dad, Dan Miller, is a literal best-selling author…of 48 Days to the Work You Love. I say literal because he didn’t hit best-seller once and claim it. He’s been at best-seller status for well over a decade. He’s also authored No More Dreaded Mondays, and Wisdom Meets Passion, which he wrote with his son and my brother, Jared Angaza.

Go find out all you need to bless yourself at www.48days.com. Or search for his top-ranked podcast, “48 Days.”

This is the first show where I asked a guest if they had a topic they wanted to specifically address for the Ziglar audience. I always have a direction I want to go. But in the first sentence…I was all there, eager to hand over the reins.

This is what Dan, my dad…wrote:

“As for a second show - I wonder about talking about the timelessness of success principles. John Lee recently interviewed Brian Tracy and I heard him give the top three characteristics of people who become millionaires:

“Those are exactly the same things I heard Brian talk about in Getting Rich in America - a six-cassette program that came out in 1990 - over 25 years ago. I listened to that 18-20 times when I was trying to rebuild after what I went through in 1988. Since then, we've added all the social media stuff - but the core principles are still the same.”

Interestingly, yesterday on the Ziglar Instagram page, Alexandra Ziglar, Tom’s daughter and Zig’s granddaughter, posted a quote from Zig that is perfect for this show:

You can find Ziglar on Instagram at “thezigziglar.” You can also get those quotes, along with a link with the quote on an incredible image, from the Ziglar Facebook page by texting ZIGLAR to this number, 38470. We’ll send you some strength to start your week off. Text ZIGLAR to 38470.

Now, next, my dad sent an excerpt from a blog he recently wrote, showcasing the seven basic characteristics of these simple, yet successful, businesspeople:

That’s where we’re going to dive in.

Ok, I’m pretty sure this is the Ziglar show I’ve written the least for, because what you laid out was just too rich to do more than…candidly hit it head-on.

We’ll start right off with what you shared from Brian Tracy, who will soon be a guest here on the show. His top three characteristics of people who become millionaires, were:

So, just to be frank, if this is what Brian and – goodness – Zig, and any leader any of us would listen to, cite as the number one trait, why is it so rare?

Seriously. This is a crux issue. My first thought is…there must be some massive fear factor in setting goals. Otherwise, everyone would do it. Is that it? Or is it just merely ignorance?

>>Hear Dan’s responses on the show.

Someone, somewhere recently…please forgive me for not remembering who you are so I can source you…claimed a statistic that the majority of people stop pursuing learning after college. Which, for those of you who, like me, never went beyond high school for “formal education,” is scary! Though, of course…like me, you are here!

But again, Dad, “continuous learning” is cited as #2. If we stopped 100 people on the street and asked them if they quit learning after high school or college, they’d nearly 100% say, “Of course not!” And to their credit, of course, they are right. They, by proxy of living, are exposed to daily things and learn…of a sort. But I’m thinking this is not what Brian is referring to.

Ok, to cut to the chase, we hear this a lot. It’s not new news. It’s un-followed news, but not new. What is it, Dad? Is it merely the reality that we live in a culture that has massively placed the pursuit of safety and comfort as the ultimate responsibility, and anything that might possibly jeopardize it is foolish and selfish and irresponsible? Which means if you take risks, you are a fool?

Dad, I know you and all the other world leaders and world-changers and wealthy, far more than the average, can easily cite cause and effect. We took risks, we succeeded. We won. What else is there?

But that is not changing the sea of humanity.

What is the magic bullet to letting folks be more accepting of risk? It feels like we’re just back to fear…</p>

So, on to your blog where you said, “From my observations, I have identified seven basic characteristics of these simple, yet successful, businesses,” though I think you can just insert…successful people:

1. An ethic of hard work.
Proverbs 10:4-5 tells us, "Laziness leads to poverty; hard work makes you rich. At harvest season it's smart to work hard, but stupid to sleep."
This comes to the issue I discussed with Roy Williams, who, like you, came from a literally hard upbringing. You worked hard by proxy. You didn’t know anything different. You brought me up in a lifestyle that didn’t force hardship on me. You just did it intentionally to toughen me by being mean and making me work hard. I’m still bitter.

But, seriously, we have a culture where every day we focus on making things easier. We don’t have to stand up to turn the TV on, we don’t have to open the back door to the SUV, it has a button. I just had a rental for a couple weeks while the van was being fixed. Hated it -- was too slow. I want to slam it myself. And now on Facebook I keep seeing posts of a remote control lawnmower. So we can sit on our butts and drink beer. Then we finally have a heart attack and go to the gym to work out, because we’ve taken all the work OUT of our daily lives.

>>Listen to Dan’s responses on the show.

2. Use of apprenticeships to train young entrepreneurs.
We have lost the art of mentoring; Jewish fathers always taught their children a trade or skill. Today, we are raising sons and daughters with no identifiable areas of vocational focus.

It’s hard. You did it with me. I have with my kids, but it’s admittedly hard. It takes time. Just parental, devoted time -- that most don’t have or want to take. So we use…formal education. Which just doesn’t do it!!

3. Small-scale operations.
We are so quick to believe that bigger is better.

I’m just going to ask you to explain this.

4. Frugality and austerity, resulting in low overhead and the avoidance of debt. The Amish view debt as comparable to “paying for a dead horse.”

I grew up your kid. But I fell prey to this. And all the biz mags they give the most attention to are stories of venture capital, Kickstarter campaigns, even friends and family money. So, I’m going to ask you to cite the realities of startup money for most businesses, and also to address the overwhelming perspective of…needing lots of money.

5. Product quality, uniqueness, and value.
The United States is known for shoddy workmanship and poor quality. A return to quality is a key to success.

We’ve gotta admit there is more focus on making money doing less, than making money out of honor and quality. Hard not to cite Dave Munson. Guaranteed for 100 years. I’ve had mine for maybe eight years. I use it daily. Overloaded. Rock solid.

What are others you are seeing succeed here?

>>Hear Dan’s comments on the show.

6. Integrity and character.
Not just morality - not doing anything wrong. But taking the initiative to do what is right.

7. Word is bond.
Legal contracts are not as binding as giving one’s word. “But whoever keeps his word, truly the love of God is perfected in him. By this we know that we are in Him.” 1 John 2:5 (NKJV)

No contract unwise, but you told me a story of Andy Andrews…is that sharable?

These amazing results appear to be based on simple, basic principles. Integrity, character, and value do have a lasting and profitable outcome. No one has to be Amish to benefit from the use of these principles. They are readily available to anyone.