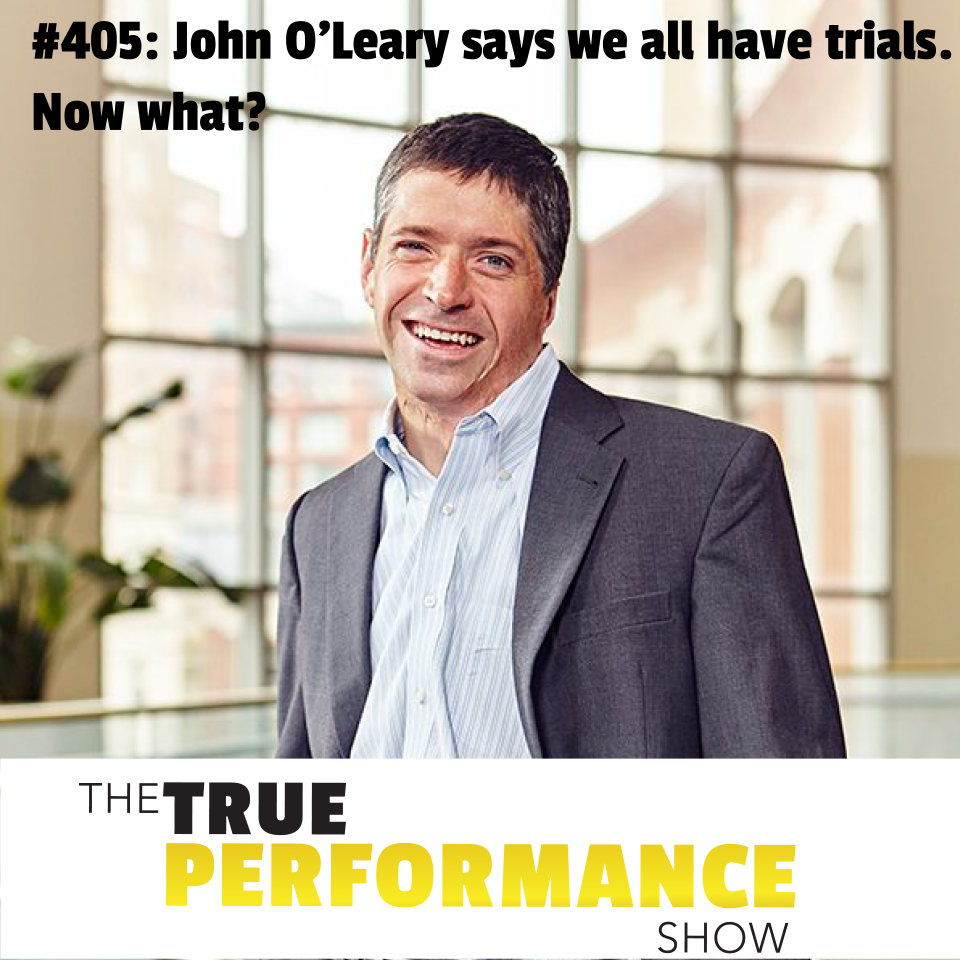 Nearly burned to death, John should have died, but decided not to. He thought he was a victim, then decided he was radically blessed. This is one of those stories you just can’t deny, and it will further strip away the anchors we all have that keep us from progressing as we should. As we could. John’s book, On Fire, is a current best-seller and has made him a sought-after speaker where he calls people away from what he calls “accidental living.” Thanks to DesignCrowd for supporting this episode.

Hey, everyone, this is Kevin Miller, and today we have episode #405. In this show, Tom Ziglar and I have an incredible discussion with John O’Leary. John was burned on 100% of his body at the age of nine, mostly third-degree burns. He should have died right away. He did not, and the reason why is significant.

We get a lot of requests from people wanting to be on this show. I watched about 30 seconds of a video where John was presenting to an audience, and immediately invited him on here.

His story is amazing, and yet…it’s ours. We have things happen to us, and we make choices.

John survived months in a hospital bed, dozens of surgeries, and years of therapy.

For more than two decades, John kept his story quiet and his scars covered. But a turning point in his business and life came when he finally embraced the scars as a gift.

John finally realized that from this tragedy came some of the greatest gifts in his life. Character. Faith. Network. Passion. Gratitude. All gifts born from the fire. He now travels the world encouraging others to wake up from accidental living and live up to the fullness of their promise.

As a boy in that hospital bed, John could not have foreseen the amazing things he would accomplish. But his journey proved more empowering and rewarding than he could have ever imagined. It gave him strength. It fueled and drove him on. It provided hope. It taught him compassion and understanding, and it gave him a solid foundation for living.

You can find out more on John at his website, [email protected]

And, folks, that’s why we have him here…he inspires. You can find his book, On Fire, at his website, or anywhere you buy books.

Before I bring you John, I want to read a testimonial he wrote to me, He said, “Zig Ziglar’s book, See You at the Top...I practically wore this book out in the early stages of transitioning from one business (real estate development) to another (speaking/writing). It was incredibly and positively influential ...it changed me as a leader, man, goal setter and business owner.”

OK, then, folks, here is the amazing, inspiring and convicting discussion Tom Ziglar and I had with John O’Leary.

John, we get a lot of interview requests for The Ziglar Show. Lots of PR companies and publicists. Our show is different. Great products, services, and ideas aren’t our focus; there are plenty of places for those. We want the best in inspiration and motivation. The fuel…that everything runs on. Without fuel, a Ferrari is useless. When I was contacted about you, I took my usual cursory look and hit your video…I replied back with an immediate yes. Your story is beyond compelling. Thank you for coming to share it with us and the Ziglar audience today.

Your book’s tagline is, “The 7 choices to ignite a radically inspired life.” You had your massive tragedy as a kid at age nine. You fought to live. But you didn’t hit the inspiration and motivation trail at ten. You spent eight months in bandages, then you say you spent 20 years with self-imposed bandages. What finally ignited you?

Reminds me of two stories. One, when we interviewed Seth Godin in show #368 and he tells the story, made up of course, but a great analogy, of two guys sent to a country to sell shoes. They hear from the first guy who says, “This is a complete disaster, no opportunity here, nobody wears shoes.” They hear from the other who says, “This is the greatest opportunity of all time, nobody has any shoes!”

Let’s dive in here first. I’ve heard the question asked before, “What is the difference that makes one overcome a tragedy or trial, instead of being overwhelmed by it?” But that feels like a “luck of the draw” question that people can’t control. Instead, I want to ask, for all those who have been victim to a tragedy or trial or lack…what can they do to overcome instead of being overwhelmed? Where do they start?

Then, in show #375, which I did with my dad, Dan Miller, we discussed a talk by Gary Vaynerchuk where he spoke to a group of college students and, in essence, told them he lacks faith in them because they’ve had it too easy, they aren’t tough enough or hungry enough.

There are tragedies, horrific tragedies, some lesser than yours, some even worse. Things we’d never wish on anyone. I don’t wish my kids harm. Yet we find a primary ingredient in a majority of successful people…that they had to overcome very hard things in their lives.

I know you value your tragedy so much you say you’d do it again! I can understand that to a degree, John. But my kids, I sure can’t go so far as wishing tragedy upon them. Yet I DO…want the strength and hunger that come from trial.

What is your perspective on this…for your own kids, even?

In your book you tell the story of coming home to your family after so many months in the hospital. What an amazing homecoming and redemption. You sit down with your family to your favorite meal your mom made and realize…you can’t feed yourself. You have no fingers and your hands are all wrapped up. Your sister sees your struggle and proceeds to stab some potatoes and feed you. Your mom speaks up and says, “Put that fork down, Amy. If John is hungry, he’ll feed himself.”

John, as a parent, my first feeling is…that’s cold and over the top. I can literally see allowing it -- that night especially, maybe a day or two -- then having a heart-to-heart talk to say, “Hey, you are going to have to step up, our enabling you won’t help you grow and overcome.”

But here you are testifying to your gratitude for what she did, that, in the moment, made you hate her. But then later you say she freed you to choose to really live.

A couple questions. One…I have kids. I can walk this out today. How do you parent differently in relation to the cultural coddling that goes on?

>>Hear John’s responses on the program

Second, nearly everyone listening to this interview, including me, is past being parented. We’re on our own, fully responsible for ourselves now.

We’ve either already been coddled, protected, enabled…or not. For those who have, how do we gain the strength you were forcibly blessed to gain?

“The 7 choices to ignite a radically inspired life.”

Accountability
“Accountability ignites within us the power to surrender to things we just can’t change, fight for the things we can, and celebrate each moment on the journey going forward.”

>>Hear John’s comments on the program

Self-Acceptance
You call people to accept their stories and scars. Even celebrate them. I know some folks who will really struggle with celebrating them. But you seem to call folks to understand their scars, give them a strength others don’t have. Again, we’re back to a decided perspective. Did my wounds strengthen or weaken me? Going back to the most successful people who so often cite their hardships as giving them the needed strength to succeed, it does seem very much a choice. What do you say to the masses of wounded people? How do they make the shift from weak to strong?

Purpose
You might save a life, even your own. I know so many people valiantly trying to help and serve others, while they, themselves, need so much saving. Even before you can save another’s life, from your example, mustn’t you save your own first?

To be a Victor
You are framing this around the question of…”Why me?” John, for many years, I ran a paid online membership community helping people who wanted to transition from traditional employment to self-employment. People don’t do this for business reasons; they do it for life reasons. Over time, I came to realize a primary obstacle at the beginning was just what you are saying. They had to come to grips with seeking an alternative lifestyle than the norm, and having to ask, “Who am I to do something differently than the norm…to strive for more than others around me?”

So, you say, “The manner in which we ask this question changes everything that happens afterward. Choose wisely.”

Tell us more about choosing.

>>Hear John’s responses on the programing

Growth
“Risking it all.” This is great for taglines for movies, but it’s not something most people are fond of considering for their lives. How do you see “risking it all” for the average person?

>>Hear what John has to say on the show

Then, “Growth is the only evidence of life.” That is a big statement, John. ‘Cause when you say growth, I don’t hear you saying…existence. Making it year to year isn’t growth. Give us some insight and perspectives on what constitutes growth.

Significance
This is a focus dear to Tom Ziglar’s heart…and the mission of Ziglar. But it does assume one has a desire that goes beyond them and their life here and today. We’re all human and want immediate gratification. Do you see living a life of significance that will “burn brightly long after you are gone” also having immediate, positive consequences as well?

“Opening our hearts, opening our arms.” How can people let go and allow themselves to do this? Many have fear and have been hurt. Is it fair to say, as with most things of value, it won’t be risk-free? It won’t be easy…

Crafting a short, simple reminder of our driving purpose. John’s, “Because God demands it, my family deserves it, and the world is starved for it.”

Ask, “Why are you here? Why do you want to thrive in life? Why give your absolute best and pour yourself into this situation with everything you have?”