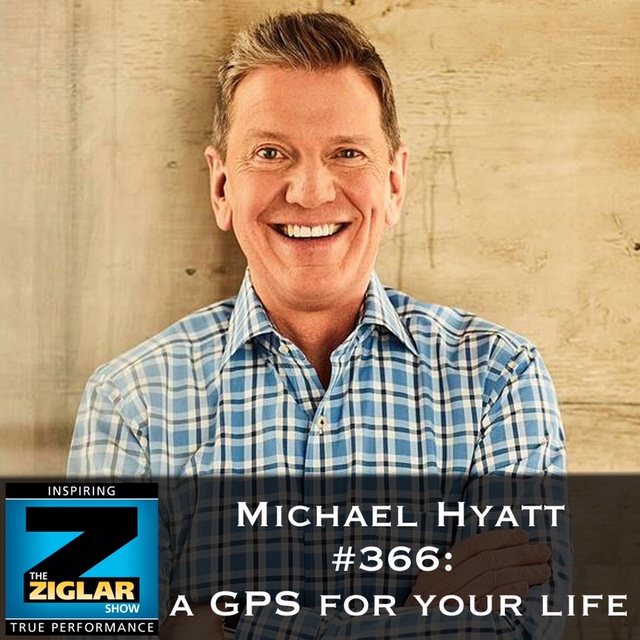 This show is brought to you in part by PIPEDRIVE, the CRM for small teams with big ambitions. Ziglar uses Pipedrive to help coordinate our sales pipeline. Head over to Pipedrive.com/ziglar to start your exclusive 60-day free trial only available to listeners of this show.

You will not be able to finish this show without changing. You can’t listen to what is talked about regarding planning your life, in the way Michael addresses it, without admitting that, yes, you can and must do it. But you really, finally can.

I came to know of Michael Hyatt as the CEO of Thomas Nelson Publishing. I had few friends and peers who weren’t avidly reading his blog as he became a household name amongst the Internet business world, publishing world, and beyond. He wrote the New York Times bestselling Platform: Get Noticed in a Noisy World and created a large paid online community on the subject of Platform at Platform University. He now produces a top business podcast, “This Is Your Life.” He’s a sought-after speaker and presenter, and…more. Go tune in, subscribe, and start getting inspired and educated at michaelhyatt.com.

So, his latest endeavor is a profound book called Living Forward. He wrote it with renowned executive coach, Daniel Harkavay.

To explain it, here is an incredibly compelling six-minute overview video by Michael and Daniel:

Before I bring you this interview with Michael Hyatt and Tom Ziglar, I want to let you know that you can buy Living Forward anywhere you purchase books. But if you go to livingforwardbook.com before March 1, 2016, you’ll get some incredible bonuses, such as:

OK, folks, if you are ready to be…changed…listen in. I’m bringing Tom Ziglar and Michael Hyatt into the studio…NOW:

First, I’ve got to tell everyone, I’ve not only read many of Michael’s blogs, I’ve literally used them as foundational guides in my own coaching and consulting to large groups. I’ve grown to revere him as a curator of best business practices and business and success wisdom.

Now, I also know much more of Michael on the personal side, through his and his wife Gail’s close friendship with my parents, Dan and Joanne Miller. This past Valentine’s Day they spent the weekend at a bed and breakfast in Tennessee, and I saw multiple Instagram and Facebook posts of the four of them.

I’ve met Gail face-to-face multiple times in my mom’s art group with meets at the 48days compound in The Sanctuary. Gail knows many of my kids!

Yet, I’ve never met or spoken to Michael. This is our first time together, but I’m hopeful not the last.

First off Michael, thank you for giving us your time today, and welcome to The Ziglar Show. I’m so honored to finally connect!

>> Listen to the show to hear Michael’s greeting.

As I do with everyone we interview, I did a search online for your name and Zig Ziglar, together. What I found was pages of you citing Zig in your blogs, tweets, Facebook and Pinterest posts, even in other interviews you did. I’m guessing…you were influenced by Zig?

>> Hear Michael’s response by listening to the show now. >>

In the lead-off to the book, it says, “This year, many of us will spend about five hours researching and shopping for a new car. Others will pore over vacation arrangements for weeks. Fiancées will spend almost 40 days planning a three-hour wedding. So why won’t most of us set aside one day to plan our life?”

While it may have been a rhetorical question, I want to address it. While I’ll attest to living much of my life intentionally, setting out and achieving BHAG’s, “big, hairy, audacious goals” (such as playing a role in the Ziglar legacy), I can also attest to having times where I gave, and give, more time to smaller goals than the legacy of my life. Why? More immediate gratification and more easily perceived control. This year I’ll give time and get big payoffs from:

To plan my life feels…huge, long-term, and so very…vague. Presumptuous and arrogant, even.

I know enough about you Michael, to know you understand this. But I’ll ask you to speak to and commiserate that this is a very real and present issue. How do you make it…approachable?

You also say in the preface:

A Life Plan is how we accomplish the title of the book, Living Forward, a proactive way of being. When we “live forward,” we are mindful and intentional, better positioned to deal with both incredible opportunities and perilous setbacks as we tackle life on “the balls of our feet instead of on our heels.”

- OK, forgive me for embracing and expounding on that. I was a pro-cyclist who, when I retired and moved to the high mountains of Colorado, took my fitness and applied it to trail running. Not too many years ago on a two-hour run at over 9,000 feet above sea level on Father’s Day, I ended the run enthused, but…in pain. My back hurt, my hips hurt…something wasn’t right. Fast-forward, I read a book called Born to Run, and in conjunction with hosting elite athletes from Africa at our home and seeing their running form, I transitioned to more minimalist running. It took me from being a heel-striker to running on the forefront of my foot.

It changed everything. My gait, my trajectory…instead of leaning back and having hard impact, I leaned forward with far less impact, more forward progression and…ZERO PAIN. But, in truth, we’re talking about just a few degrees of actual change. We like to talk about 180 degree changes, but this was probably five degrees, at best.

So back to your statement, “When we ‘live forward,’ we are mindful and intentional, better positioned to deal with both incredible opportunities and perilous setbacks, as we tackle life on ‘the balls of our feet instead of on our heels.’”

So can I extrapolate from this, that your premise of Living Forward is a somewhat subtle personal shift, maybe just a few degrees, but it produces a massive paradigm shift? It changes…everything?

>> Listen to the show to hear Michael Hyatt’s informative comments

OK, the video points were just pretty darn mesmerizing, at least for me.

Right there, folks, let’s stop a second. Imagine being on a cruise ship. Would you be ok if the captain came on the speakers and said, “Folks, instead of going to our intended destinations, we’ve decided to instead go about 20 miles out and then just drift for a few days and see where we end up. Depending on the wind and current, we could end up in enemy waters, tsunamis, hull-tearing reefs, or just out so far we run out of gas, and we could be lost for weeks or months”?

None of us would be ok. But what Michael is talking about here is just this. We do this in our lives. Our days exist on the daily tangible chores that would happen on that ship: cooking, working, playing, relationships, home maintenance, and more. Yet, overall, we are drifting to no particular destination.

Michael, is that a fair assertion?

>> Hear how Michael responds by listening to the podcast.

The definition of passive is, “Used to describe someone who allows things to happen or who accepts what other people do or decide without trying to change anything.”

Michael, that is…harsh. There is no epic or worthy movie or story about someone who is passive. Or, if there is, it’s because someone started there, then grew and overcame and grew into great purpose.

Nobody wants to be labeled passive. Yet, Michael, you’re stating that without an overall plan, we are all -- by proxy -- living in passivity…letting life happen TO us, yes?

>> Listen to the show to hear Michael’s reply!

You and Daniel say that with a Life Plan we gain clarity, mindfulness, and a roadmap as we 1) become aware of our current location; 2) decide where we want to go; and 3) start working toward our destination.

#2 and #3 feel more attainable. Stating a goal and walking toward it. This is where most goals talk focuses. It reminds me of the inherent difference between coaching and counseling. Coaching is saying, “OK, where do you want to go and what do we need to do to get you going in that direction?!” Counseling on the other hand, is taking into account…where we’ve come from and where we are now as a result of that.

So when you say the beginning of a Life Plan is “Become aware of your current location,” how deep are we going here?

>> Hear Michael’s response by listening to the show!

Back to what “drift” is, you cite some common…maladies. Such as:

“You look up and find yourself far, far away from where you intended to be.”

Now, I know plenty of goal-oriented, striving, succeeding people who have problems. Some of those you listed, Michael. But it’s generally AN area of struggle. What you seem to be citing here, and what I’ve experienced, is “drift” is a bevy of underwhelming symptoms. Does that ring true, Michael?

>> Listen to the show to hear Michael’s response.

So the four primary causes of drift you cite as:

Because you have a goal, yes, but even more…a deadline!

So, on that note Michael, is a big and relevant point of having a Life Plan…having a, in a good way, a focus and a deadline?!

Which, to me goes right back to…reacting instead of, can I say, pro-acting? But Michael, this is the essence of maturity. Doing what needs to be done before it’s critical. We put oil in the car before the engine seizes. But in our lives, we don’t go to the doctor until we get sick, hurt, or diseased. We don’t go to the marriage counselor until divorce is mentioned. We don’t update our resume and knock on career advancement, or put the business plan together…until we are fired or work is so toxic it’s killing us.

What you’re calling for here is…wisdom. The Bible cites God parting the waters, raising the dead, having food fall from the heavens…performing grand miracles. But they are 100-to-one on Him calling us to seek and have wisdom. Maybe if we did that better we wouldn’t find ourselves so often in need of a miracle. Would you then, Michael, say having a Life Plan is having wisdom and maturity in and for our lives? Rising up to claim and pursue our godly inheritance? Instead of sitting idly…passively by, and missing it?

Your life will be different in three significant ways

I’m going to ask about one…courage. The definition…yeah, I like words…is, “The ability to do something that frightens oneself.”

I’m healthfully frightened of heights because if I fail and fall, I could be tragically wounded and die. I’m frightened of illness and disease for the same reason.

But here we’re talking about a Life Plan. You’re saying with a Life Plan I’ll have more courage. I’ll be less frightened. That is exciting and hopeful and…

Let’s end here. How does a life plan take away fear?

>> Hear how Michael responded by listening to the show.