Show #409: Don Yaeger – What we learn from the greatest sports teams 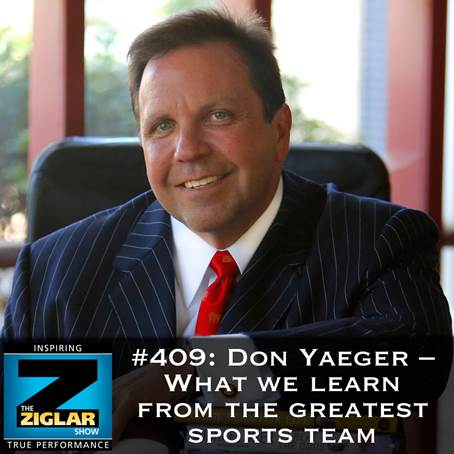 Don calls many of the greatest sports figures on the planet…friends. He’s privy to their personal lives and who they really are, and he’s studied them and the greatest sports teams on earth. From it…he found the primary ingredients that led to their success. He shares it in his book, and we dig in for this show.

Hi, this is Kevin Miller, and today we have episode 409 of The True Performance Show by Ziglar, where we break down the pillars of personal development and performance and deliver them to you in a way you can’t help but take action on for your best success. Today, Tom Ziglar and I bring you Don Yaeger.

As an award-winning keynote speaker, business leadership coach, an eight-time New York Times best-selling author and longtime Associate Editor for Sports Illustrated, Don Yaeger has fashioned a career as one of America’s most provocative thought leaders. As a speaker, he has worked with audiences as diverse as Fortune 500 companies and cancer survivor groups, where he shares his personal story.

He is primarily sought to discuss lessons on achieving greatness, learned from first-hand experiences with some of the greatest sports legends in the world.

Additionally, Don has been retained by companies and organizations to coach their leaders, management teams, and employees on building a culture of greatness by looking at great teams in sports and discerning the business lessons we can learn from them.

Throughout his writing career, Don has developed a reputation as a world-class storyteller and has been invited as a guest to every major talk show – from Oprah to Nightline, from CNN to Good Morning America.

Yaeger began his career as a reporter for the San Antonio Light, where he rose through the ranks to pen investigative features for the daily. He later moved on to the Dallas Morning News. Following his stint in Dallas, Yaeger worked as a political editor for the Florida Times-Union.

After four years, he decided to dedicate himself to the pursuit of writing books. Yaeger’s first book, Undue Process: The NCAA’s Injustice for All, was published in 1990. In the 22 years since, he has penned 23 more books, including nine New York Times best-sellers.

Great Teams, published by Thomas Nelson (division of Harper Collins), to be released on July 19, 2016.

Don, you are privileged to have held court with an incredible number of the world’s greatest athletes and sports teams. You’re also lauded as a master storyteller. I saw on your Facebook page a mention about Snoop Dogg’s recent “throwing out the first pitch” debacle, and that you spent an evening with him and have quite a story. That’s a good place to start…fill us in?

We are a world hungry for…story. Which is hard for me, as I’m a to-the-point guy. I love bullet points. But I know well that if you truly want to engage people, you need to tell them a story. Did you just naturally come to storytelling, or did you pursue it as a craft because you understood its power? Or both?

So you’ve written a book, Great Teams: 16 THINGS HIGH-PERFORMING ORGANIZATIONS DO DIFFERENTLY. You speak on building a culture of greatness by looking at great teams in sports and discerning the business lessons we can learn from them.

We have lots of business owners represented in the Ziglar audience that will benefit from this, but I’m guessing the core principles are relevant for us all, yes?

> >Hear Don’s responses on the show

As I always do, I asked you about your personal Zig story.

You said, “I had an invitation from Tom to be on a broadcast for an earlier book I wrote discussing the habits of high performers. At the end of the video work, I had lunch with Zig -- which still, to this day, goes down as one of the highlights of my career. Michael Jordan, Joe Montana, Cal Ripkin... none of them made me feel the way I did while dining with Zig!”

OK, that feels big, Don. I want to know about this. Most people would pay a small fortune to spend time with Michael Jordan, Joe Montana and Cal Ripkin…legends of sports. Hall of Famers at the absolute top level. So I want to ask two things.

First, what were some feelings you had in meeting with those three legends? I’m sure there was much good.

OK, now…what feeling stood out…differently with Zig? Not asking how it was better, but maybe…something more?

>>Hear Don’s responses on the program

In show 397 we interviewed Simon Sinek, author of Start with Why. But you are talking about sports teams. At face value, it’s easy to think, in regards to what is a pro athlete’s why, it’s to win! That is fame and money! Again, Don, I was a pro cyclist. Legit, I was pro. Though admittedly…I raced against Lance Armstrong a handful of times, but I was NOT in his category. I was enough to race against him, but…not even close to his level. Drugs and scandal aside, of course. But…what was my why? I was going for glory, fun, adrenalin. And later…to win a paycheck to help feed my family. But here you are talking about truly great teams and athletes at the top of the world of sports. Making millions. Famous. Tell us about the WHY they had that truly mattered…and relates to us.

When I asked how you wanted to inspire the Ziglar audience, you said, “I want the audience to realize we can all be part of a great team, but we have to study other great teams. Zig said often that success leaves clues. The work I've done is to uncover the clues of the greatest teams in our generation.”

So, if we want to succeed in any area, just…study those that are successful in that area. This is wisdom that has been said before, but I’m assuming that even at high levels you must be seeing people violating this principle.

Someone said in a testimony, “What Don does is bring the greatness in sports to life.”

We use sports as analogies for so much. I was a pro cyclist and I realize the glory, as it’s maybe the rawest place to put ourselves on the line. And, Don, in working on this show, I had an epiphany. Maybe our love of sports is because it’s the one place where we not only allow and accept, but we glorify and applaud failure! While we love the epic success, we also adore the 110% effort that did not work. I grew up on the NFL. I’d say an average game is 95% failure and 5% success. And we are all ok with that!

But in reality, on the couches, we live as if we want, expect, and must have a 100% success rate. Our income and savings and retirement are all numbers that are supposed to continually rise. Period. Our house size increases. We get later model, nicer cars. We have more and nicer amenities. Bigger and grander vacations. We in no way expect to ever have a failure. We pattern out our lives to “work” and are seldom found… “Going for the gusto.”

So…how do you see us “civilians” and “spectators” and “average Joes” who live for watching the big game…to actually live out a big game?

>>Hear Don’s responses on the show

So we’re looking at the positive attributes that make a superstar. What are risks and dangers? The primary ones you saw handicap these people?

A primary aspect of your professional life is…writer. You had beginnings as a reporter. What drew you to that? Reporting? And do you feel like today, that’s what you are still doing, in essence? Reporting?

>>Hear Don’s responses on the program

In browsing the mere contents of your book, Don, just the chapter titles alone are provocative. Some I, maybe arrogantly, felt I understood at face value. Others…uh…not at all.

in being involved with the greats, masters of the universe, how did it convict you personally? What are some primary influences from constantly being with people functioning at such a high level, on your personal life?