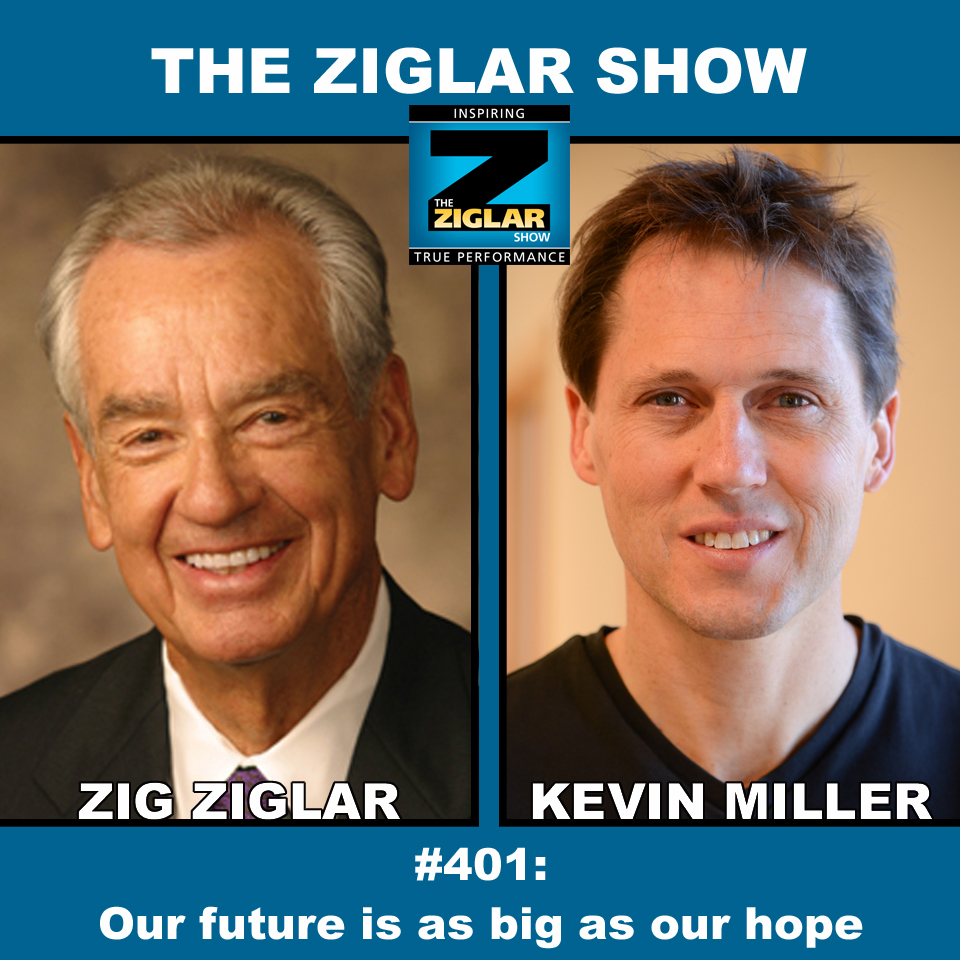 “Men and women are limited only by the size of their hope,” Zig cites in this show. We also discuss what Jesus said in Matthew 18:1-4: “I tell you the truth, unless you change and become like little children, you will never enter the kingdom of heaven. Therefore, whoever humbles himself like a child is the greatest in the kingdom of heaven.”

This is episode 401, which I titled “No hope, no future.” Does that sound trite? Listen in to 11 minutes of Zig Ziglar, the world’s grandfather of inspiration, as quoted by Seth Godin.

And what do children have? Hope. Stupid hope? Zig cites a quote in this message that says, “Men and women are limited only by the size of their hope.”

We delve into the specific need that for hope to have fruition, it needs…personal direction. Where do you get that? Listen in.

Zig leads off with, “Inspiration is a hope builder.”

I think inspiration births hope. Haven’t you ever seen a movie, read a story, or experienced something that significantly changed your paradigm and gave you a desire for something…a hope?

You could say it’s semantics, but as I’ve grown older, I don’t think in terms of having dreams anymore. I either have things I intend on pursuing and attempting to achieve, or…I don’t.

Some look very altruistic; some, at face value, do not. We are all responsible for the stewardship of our lives, time, money and pursuits.

Zig cites a quote, and I paraphrase, “Men and women are limited only by the size of their hope.”

This is interesting. The other day, my family were sitting around together and at some point my seven-year-old daughter made a comment about how good she was at something. It wasn’t bragging or self-aggrandizing; she was just stating something that was true. The sky is blue, gravity exists no matter what, and she was commenting on an ability that she was, in fact, very good at. I turned to my wife and asked, “When do we lose that?” We have two older daughters who used to be the same. Now they are 16 and 19 and, though they know well some areas where they excel, they’d never speak it, and are far more prone to downplay and even degrade themselves.

When is the age of negating ourselves?

Sure, we mature and learn humility and NOT to come off as bragging. But does that mean we can’t ever state a true ability and strength? I know I’d rather have heart surgery by the surgeon who admits he’s exceptional; the one that says, “Oh, I don’t know, I guess I’m OK,” I’ll pass on.

I say all that to question the quote Zig cites, “Men and women are limited only by the size of their hope.”

Again, as kids, our hope is unlimited. To some degree, we may think it’s somewhat ludicrous, as kids claim they want to be astronauts, super-heroes, or, in my kids’ case, ninjas. (My four youngest kids just completed a weeklong, America Ninja Warrior Camp.)

But then, again, what cause would we ever have to limit their hope? They are young. Why isn’t about anything possible?

To that degree, I recently heard about an old school mate. His dad was a wealthy professional, a lawyer. My friend followed in his footsteps and today is a wealthy, successful lawyer. He wasn’t smarter than anyone else. He came from money, but there are plenty of successful lawyers who did not. The main reason he did what he did? He just expected he could.

But back to hope. And kids. When do they go from hoping in just about anything, to…”reality”? Shelving hope and being reasonable?

Today then, what about us? What is the size of our hope? We can come up with so many reasons and excuses why we shouldn’t have big hopes. Why we can’t. Why it’s not reasonable or responsible.

That’s our choice and what we have to live with. However, it does not discount the truth of the statement, “Men and women are limited only by the size of their hope.”

WHAT IS THE SIZE OF MY HOPE?

In Zig’s story he cites hope coming from someone with basically…nothing. John Johnson’s mother. It’s interesting how many times the greatest hope comes from the least opportunity. It produces hunger. Those of us who were always fairly well fed are often more inclined to maintain our regular feedings than hunger for something greater.

If you aren’t aware of Zig Ziglar’s story, I’ll tell you that with all his bestselling books, my favorite is The Autobiography of Zig Ziglar. It tells the story of his…unique childhood and circumstances. You can get Zig’s autobiography at Ziglar.com.

Zig mentions the power when you are given

I want to hone in on…” Direction”

If hope in your life is sparked, if you find encouragement, how about direction?

A favorite movie of mine is The Count of Monte Cristo with Jim Caviezel. If you haven’t seen it…well, again, I own it. My kids pulled it out two nights ago and watched it while I crafted this show. In it, the main character has the amazing fortune to find…a guide. A teacher. A guide. And he’s given direction.

Many of the greatest and most epic movies have this occurrence. A lost soul finds a blessed teacher and gets…direction. The Matrix with Neo and Morpheus. Another movie I own and watch repeatedly.

In real life, however, this divine happening of a divine, invested…teacher, guide and mentor, seldom happens. We lack tangible direction.

Where do we find it? Apprenticeships and passing down skills and trades has nearly disappeared. So we turn to

But, folks, that’s not the road the majority of success stories ultimately come from. They come from personal, one-on-one understanding and invested input. Where do you get it? Today? You generally pay for it. Now, I don’t say that to sell you personal coaching and consulting. I’ve done a lot of it in my time, but haven’t taken on a personal coaching or consulting client in almost two years. Tom Ziglar offers a significant coaching experience.

But whether Tom or someone else… If you look at many of the top authors, experts, speakers and authorities, you’ll find few, if any, who haven’t, at some point, invested in personal coaching and consulting. At a pricey cost. They made a big step. A big investment. They did what few do.

My most recent great benefit was hiring a counselor to help me discern why I continue to live out certain patterns and frustrations. It wasn’t clinical therapy, he asked great questions and helped open me up to some revelation.

Zig ends giving testimonials of people who read his book or listened to his audio, “See You at the Top,” and went on to become dramatic success stories.

Which brings us back to where we began. Is Zig a braggart? A narcissist? Or is he, like my young daughter, just telling the truth of a God-given ability? He went through much, worked immensely hard, and crafted a dramatic message from his journey. It helped people. Should he downplay that?

Do you have any skills, ability, or knowledge that could help another? Should you stay safe and stay quiet and deny people your value? Or…offer it? Admitting you have…value to give?